Step in to a vast history dating back to the 14th century and rich cultural heritage, with a trip to the historic city-state of Malacca (Melaka in Malay), which is located 92 miles south-east of Kuala Lumpur. The city boasts of an eclectic mix of colonial-era landmarks like churches to mosques, quaint streets lined with local food stalls, beautifully preserved historic buildings, as well as fascinating museums such as the Malacca Sultanate Palace Museum and Baba Nyonya Heritage Museum.

To go along with that, tourists can explore the preserved structures, culturally relevant street art, and religious buildings that have been around since Malaysia was still a colony of Britain. Tourists would find that the city has a unique charm to it brought about by its history.

You can clearly see western influence in the architecture and the whole experience when you go around the city. Malacca is an enclave that has more a relaxed environment than the nearest city which is Kuala Lumpur.

Known as “The Historical State of Malaysia”, the first sultanates in the country were established in Malacca. It was classified as a World Heritage Site in 2008 and tourism has boomed for the past decade with thousands and thousands of tourists visiting each year.

We offer a Malacca Tour Package for those who are interested. The trip starts at nine in the morning and is inclusive of a Malaccan-style lunch. The trip will cover landmarks which include churches, historical buildings, museums, and old colonial structures.

Our guides will also give a brief history of the city including the British, Dutch, and Portuguese influence that has shaped the city and its culture to what it is now. There are also shopping centers and dining places where tourists can stop to get for food and souvenir shopping.

The tour is highly educational for tourists especially for those who are interested in Malaccan history. Our expert guides will be able to tell you all this and more. We will also be providing you with a few important details about the scenic route you’ll be taking in our tours.

Historical Roman Catholic Church which was built back in 1710 continues to hold mass up to this day. It was a place for the prayer of the Portuguese Catholics after the Dutch and Portuguese built an alliance during the Spanish Succession era. 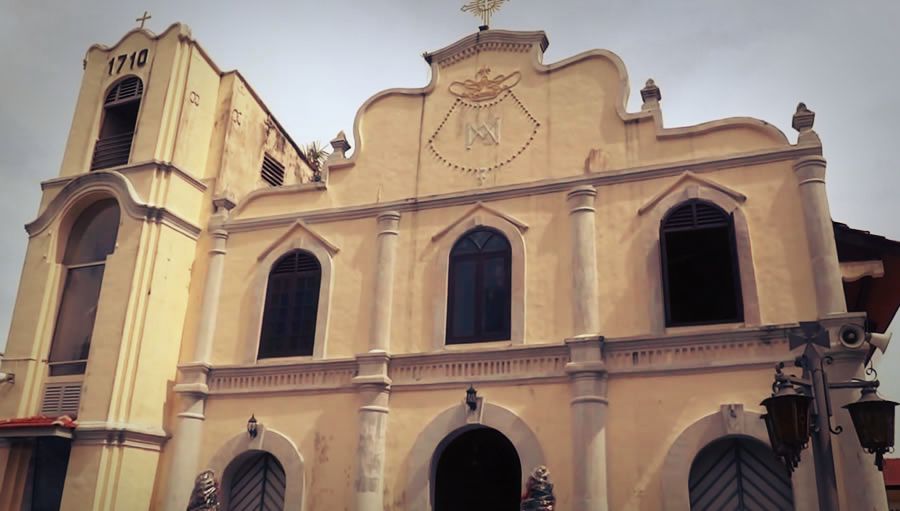 It has a beautiful interior accentuated with woodwork which is typical of old Catholic churches. The white paint makes it a great background for pictures. The old church bell and the Lord Before the Resurrection statue are the main features of this church.

Construction of The Stadthuys was between 1641 to 1660. This was the center of the Dutch government after they took over the Portuguese in the mid-1600’s. For 300 years, this colonial structure with its strong wooden doors and louvred windows had served its purpose as an administration building for the country.

During the 1980’s, a decision was made to convert the building into a museum. Today, The Stadthuys shows the full history of Malacca inside its walls. You get to see artefacts and remnants of the old Sultanate, colonization era, and other relevant historical items that relate to Malacca.

Christ Church can be seen just beside The Stadthuys in Malacca. Built in 1753, it embodies the quality of Dutch architecture during that era. It has wooden beams, Dutch tiles on the roof, laterite brick blocks on the walls, and the pavement had granite blocks.

This historical site continues to function as a Protestant church and is the oldest in the country. Plaques and Tombstones are riddled inside the church walls. The church bells, silver altar vessels, and altar bible are remnants of the history of the church. You can even read records of the church that date back hundreds of years.

This early 20th century landmark was built for the reigning British Queen in 1901 which was Victoria Regina or Queen Victoria. The fountains are still fully-operational continuing to attract tourists. The elegance of the Queen Victoria Fountain has now lasted for over a hundred years which can be seen in beautiful photos by tourists and photographers who visit Malacca. 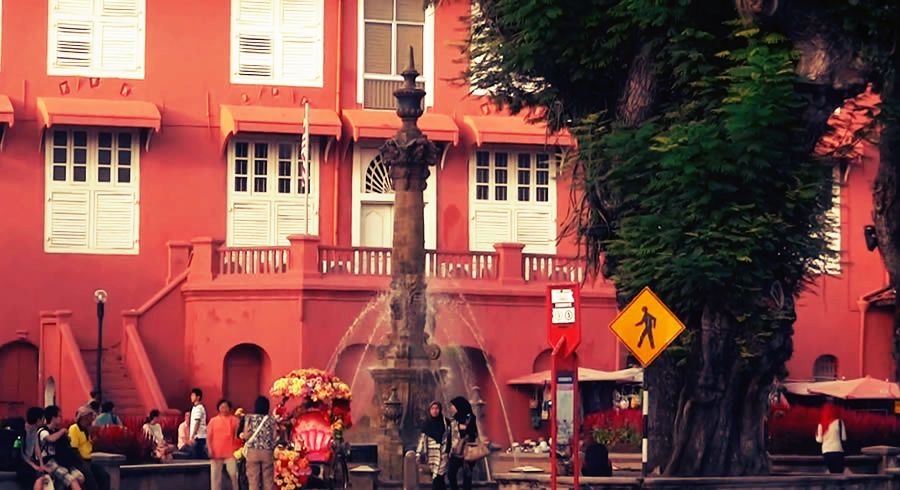 The Chinatown in Malacca is found in Jonker street and is famous for a lot of different things. Visitors will see the Chinese culture in this area especially at night because there you have a lot of vendors and traders opening the shop to sell their stuff. 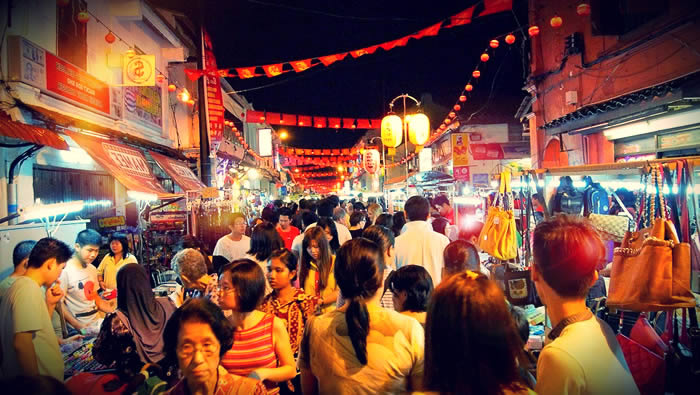 A favorite among visitors is the street food which they enjoy as they walk the streets. Those who want to buy souvenirs during their visit can find them easily with several shops selling souvenir items at low prices. There are even stage performances that are being held in several sections of the street which shows traditional Chinese entertainment.

Harmony Street and Millionaire street are popular spots included in tours around Malacca. These are part of the attractions for sightseeing because of the different religious structures found along these streets. Tourists can look at a Chinese temple, Hindu temple, and a Malay mosque when they pass through. You can see the unique features that can be found in these buildings and distinguish the difference in their design as well. 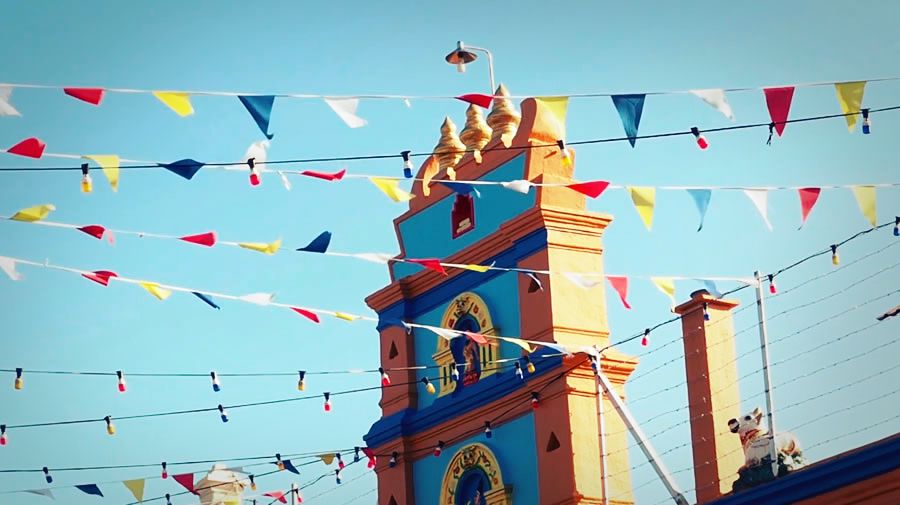 Another piece of Portuguese and Dutch history, the ruins of the church have been made a tourist attraction in Malacca. Tombstones and a statue of the St. Francis Xavier damaged during the war in the 17th century. 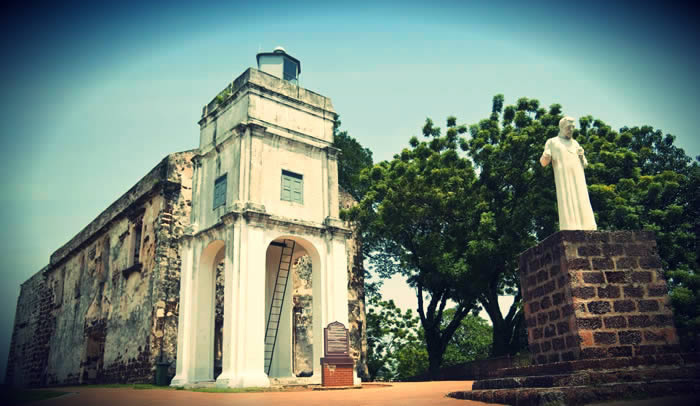 Visitors can explore the exterior and interior of the ruins to observe old colonial architecture and pieces of history of the area. People climb up and down the pathway to the A’Famosa Fort. The pathways also lead to a viewing area where you can see the whole city of Malacca and you might even pass a street performer as you are walking.

The A’Famosa is a fort built by Portuguese colonizers to serve as a stronghold when they overtook Malacca from the Malays. It served as a strategic location because it gives a clear view of the river. This structure is one of the last remaining European structures in South East Asia from the colonial era. 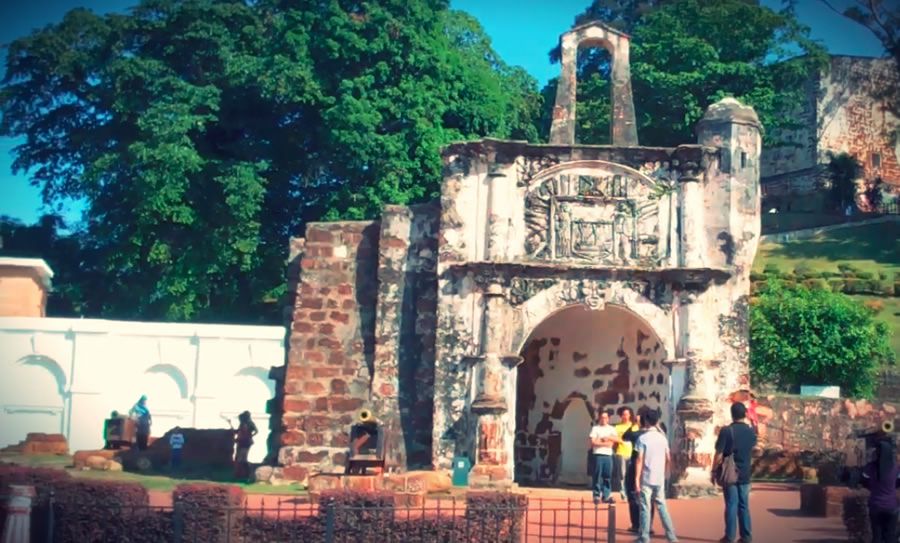 Today, photographers and tourists take lots of pictures inside the A’Famosa or Porta de Santiago. There are remnants of the coat of arms of the old Portuguese army. You can also go up and down the towers of the fort to see a good view.

Near the independence building and the Portuguese fort ruins in Malacca is a replica of the Sultanate Palace. This reminds people in Malaysia of the ancient times when this area was ruled by sultans and their people.

The structure retains the Malay history of the city with its distinct architecture. It also houses preserved items of the old sultanate culture which tells the story of the sultanate back in the day. You can see weapons, art, instruments, emissary gifts, and old photographs from the time the replica was built and the old sultanate. 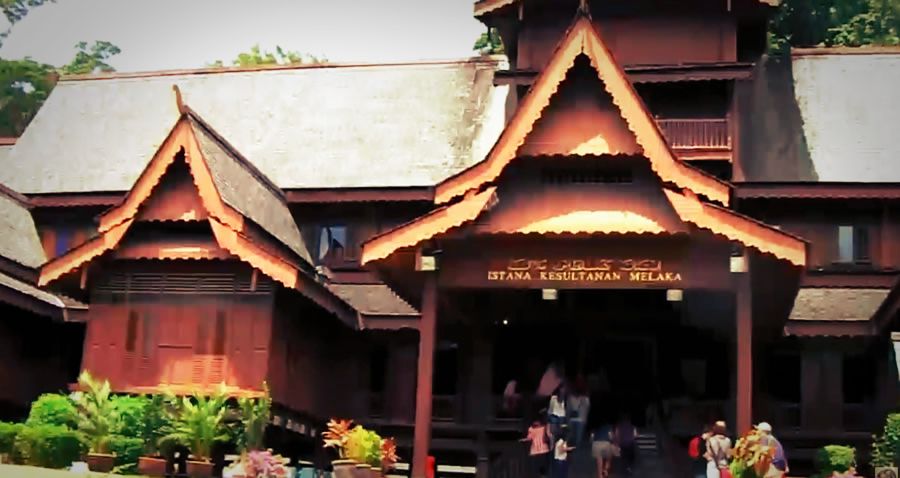 From the Sultan’s Palace, you also get a view of the Straits of Malacca. This was a strategic location because from the palace you can see the flow of trade ships in this port town. It also helped in expanding the influence of the Malay Sultanate during the 15th century.

After visiting the popular landmarks, old-world structures, and rich culture, tourists also love visiting the shopping areas around the city of Malacca. There are small shops to big shopping centers that sell all kinds of stuff that you can bring home. 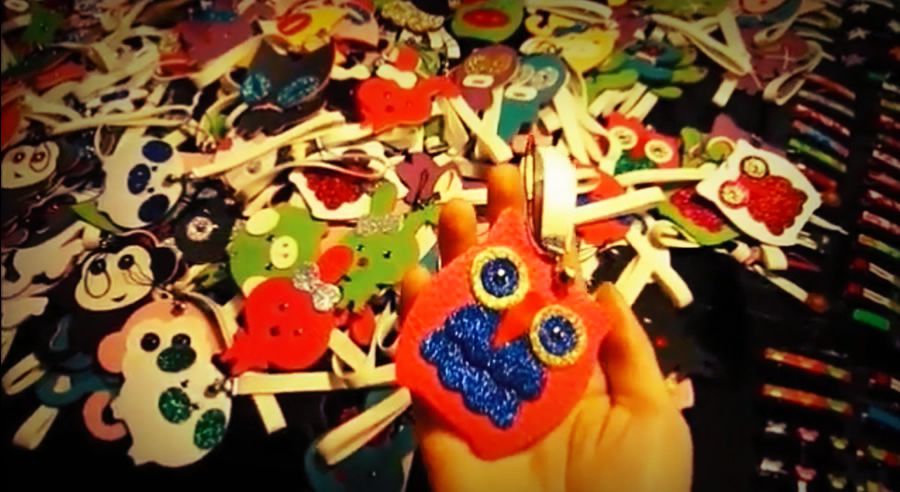 Local handicrafts such as Nyonya products can be bought in select stores within the city. These local products include chocolates and distinct souvenirs that can only be found in the city. People get to bring a piece of Malacca with them before they leave.

There are also souvenir shops in every tour stop. You can purchase an item from their shops to remind you of your visit to places like the Malacca House Museum, A’Famosa, Sultan’s Palace and many other attractions in the city.

View of Straits of Malacca

The Straits of Malacca is a major highlight when you get to visit the city of Malacca. Aside from being a beautiful site, this body of water played an important role in the progress of the city of Malacca throughout history. It facilitated many local and foreign trade coming in and out of Malaysia which gave it a bustling economy.

There are many sites that offer a view of the Straits of Malacca. For example, St. Paul’s Hill and the Independence Building already carries a big historical significance in the country and to add to that it also offers a good view of the lake in certain spots inside their area. Hotels and inns situated near the Straits of Malacca use the view as a selling point for their business as well.

The Malacca River was a trading port for hundreds of years connecting Europe and Asia with tons of goods being passed through each year. It spans around 10 kilometres which made it a strategic location for a port. 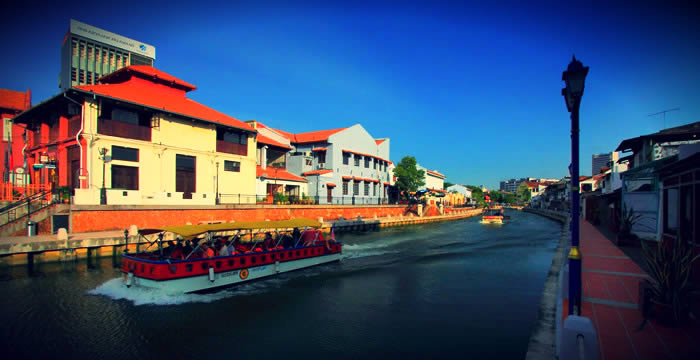 Nowadays, the Malacca River is a site of a popular cruise that takes hundreds of tourists travelling on the river. They get a good view of the popular tourist attractions in the city from the boat. It offers a different perspective of the sights around the city.

Tourists will also be able to see the many bridges built on top of the river. These have historical symbolism such as the Tan Boon Seng which was the site for many battles with the Portuguese against the Malays during their invasion in the 1500’s. Bridges like the Ghost Bridge of Malacca and the Old Market Bridge provide a good background for pictures.

Kampung Morten can also be seen when you pass through the Malacca River. It is identified as a National Heritage Site which gives you a glimpse of the old Malay villages. This museum is a piece an of Malay architecture that has been preserved to show the lifestyle back in those days.

There was also a massive street art project that targeted the area or walls surrounding a section of the river. Here graffiti artists and painters showcased their work on the walls along the river on the side of the Jalan Kampung Hulu. Most of the art are murals of animals, local produce, and popular Malaccan cuisine.

A place with a rich history and culture would more than likely produce a cuisine that has unique dishes that contain flavors that are distinctly theirs. This is exactly what Malacca cuisine offers to all their visitors with hundreds of restaurants offering unique themes and dishes to their customers. 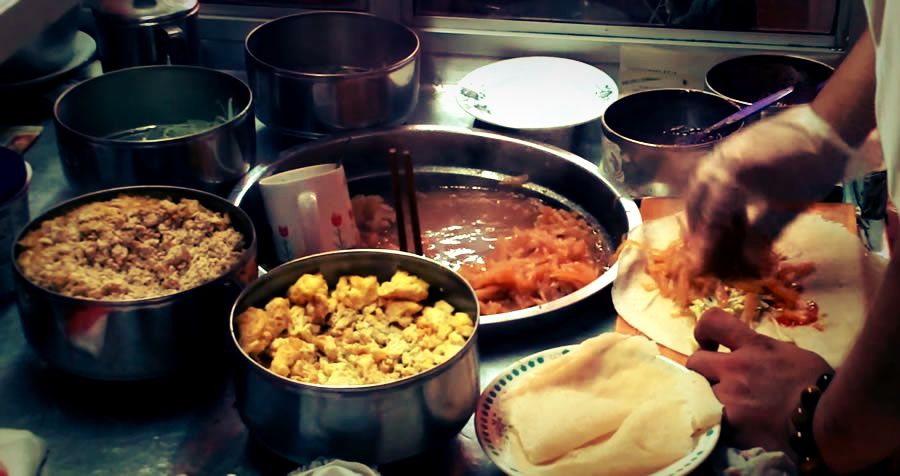 Local Malaccan dishes are the first thing to try out when you are looking for street food or local dishes in restaurants in Malacca. There’s the Chicken Rice Balls which you can eat directly and has the tasty taste of steamed chicken. Malaccan trademarks include the Peranakan dishes which are a line of dishes developed by the Peranakan race in Malaysia and the Satay Celup offer a satay style of cooking and eating where you dip your skewered meat and vegetables inside a boiling hot gravy made from peanut sauce.

Desserts such as the Durian Cendol and the favorite coconut shake are also uniquely Malaccan as well. Stalls that sell these dishes on the street often have long queues since these are perfect for tourists and locals enjoying a stroll around Malacca. Sweet tooths will surely love these wonderful concoctions. 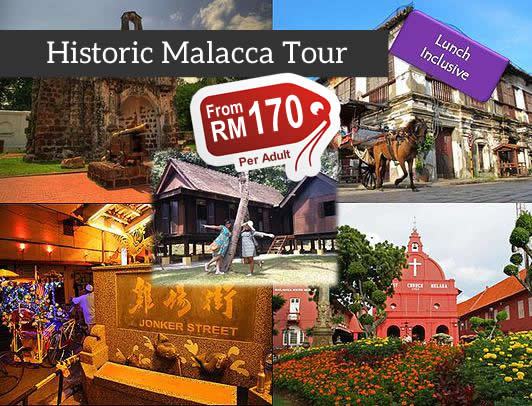 Watch this video to find out more about the place of interest in Malacca.

Our Map From Kuala Lumpur to Malacca Day Trip